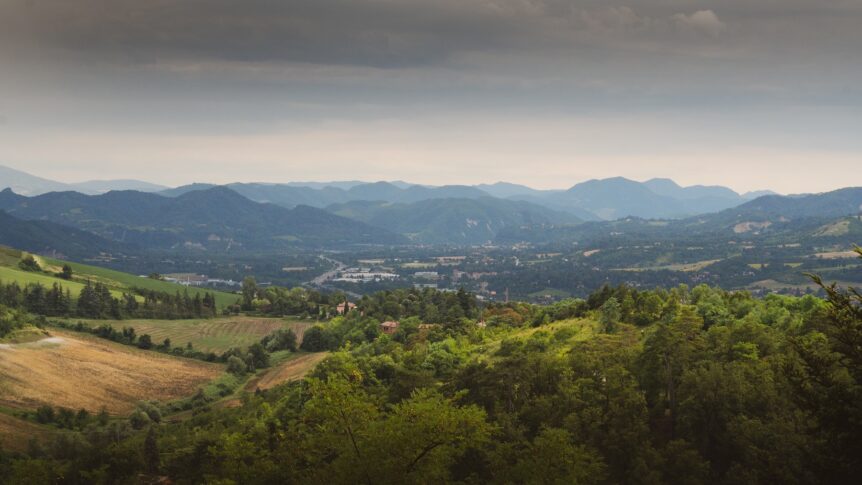 This post is part of a series of blog posts covering our Tesla Model 3 road trip. If you didn’t already, read it from the beginning

With a 3-day stay at the old mill south of Florence, at the border of Chianti, we had a perfect base from which we could explore that region of Tuscany. I was so much looking forward to driving in the hills so the whole trip was not going to be on the highway.

We had been looking forward to this day because we had a lunch date with some friends from Modena. I was eager to go to the hills, so we decided on a restaurant in the hills of Bologna, called Cà Shien. It is the perfect spot, great food and close to great views of the area and Bologna.

First we had to get there, and we actually ended up taking the highway because we slept in and had to gain some time. Taking the highway meant we could also do a quick stop (around 20 mins) of supercharging in Florence. The locations of superchargers are often very close to the highway so you don’t need to go into the city. Good call by Tesla.

Actually, let us talk about Tesla’s superchargers for a minute. A huge part of Tesla’s success can be contributed to their charging network. A Tesla supercharger is a very fast charger that currently charges at approximately 120-150kw. (This is three times as fast as the fast chargers I mentioned in another post). At this time there are close to 15,000 superchargers World wide. 15,000! Image not only building a car that no other car manufacturer had dreamed about, but taking the huge investment of making sure there are sufficient charging options, and super fast ones even. Take a look at this picture to see the current state of Tesla superchargers in Europe (yes, these are only Tesla sites). The red markers represent supercharger sites. The grey markers represent hotels and destinations that have installed a Tesla wall charger (popularly called Destination Chargers), with which these destinations can offer free charging to their customers. Clearly differentiator for hotels and venues in the future:

At the time of writing the current version of superchargers in Europe is called V2. This means they have a maximum charging speed of around 150kw. My own experience is that I typically get around 130-140kw. On the current limits of charging speed on the Model 3 this translates roughly to charging from 20% to 80% in around 25 minutes. Tesla has set up the first V3 sites in USA and will roll out V3 over Europe starting before end of year 2019. Supercharger V3 has a charging speed at maximum 250kw, translating to approximately 1600km/hour. On a Model 3 this means a charge from 20% to 80% in minutes. Imagine the investment of installing the superchargers in the first place, then upgrading all of them to V2, then upgrading all of them to V3. Tesla continuously expands the supercharger network. This is core to their strategy. Expand, grow, and make owning a Tesla a great experience.

The hills of Bologna

It was an interesting lunch where our Italian friends of course had to know about the Tesla. As we were describing what the car is like, you could see the eyes of our friends widening and their jaws getting closer to the table. They were amazed that the Tesla runs entirely on electricity, and when we explained that the long range dual motor Model 3 has a range around 500km they were ecstatic: “You have to take us for a spin!“. And of course we did.

Getting into the car taking a spin, all of us, we decided to go to a nearby church, the Santuario di Madonna di San Luca. The sanctuary placed 300 meters above the city, over which there is a fantastic view to one side and a view over the hills on the other.

“Mama Mia!”, a friend exclaimed when I accelerated to around 80km/h in couple of seconds. Actually everyone got a smile on their faces. The instant torque and acceleration is incredible and our friends could hardly believe the silent rocket-like experience. The reaction was followed by a big laughter when I eased off the accelerator and the car used regenerative braking and went to almost a complete stop without me touching the brake pedal. To this day still one of my favorite features of driving electric, Tesla in particular.

Our friend said: “I have a friend who is an engineer and a couple of years ago I asked him how long it would be until a car could run entirely on battery and be a sufficient replacement for a regular car. He said it would take 30 years. I see now that he was wrong. I cannot believe this driving experience!“. And it is true. Not only is the car driving on electricity only, brought by the 2,170 battery cells packed into the bottom of the car, spread out, creating a very low center of gravity. But the Tesla Model 3 is more than a sufficient replacement of any “ordinary” car. It is a completely new driving experience and this is part of the reason it feels more luxurious than any other car I have driven. I have been fortunate to have driven very nice cars like Audi, Volvo and Mercedes and I have to say nothing compares to the Tesla. Obviously, his engineer friend was wrong. But if you had asked anyone 15 years ago no one would have thought we would drive electric in 2012, which was the launch year for the Tesla Model S. It was a game changer and now Elon Musk and Tesla have created an amazing follow up with the Tesla Model 3, which is the first car in the financial range of regular people (due to the crazy taxation in Denmark)

Stay tuned for the next post about our final days in Italy and Val D’Orcia, our favorite place in Tuscany!