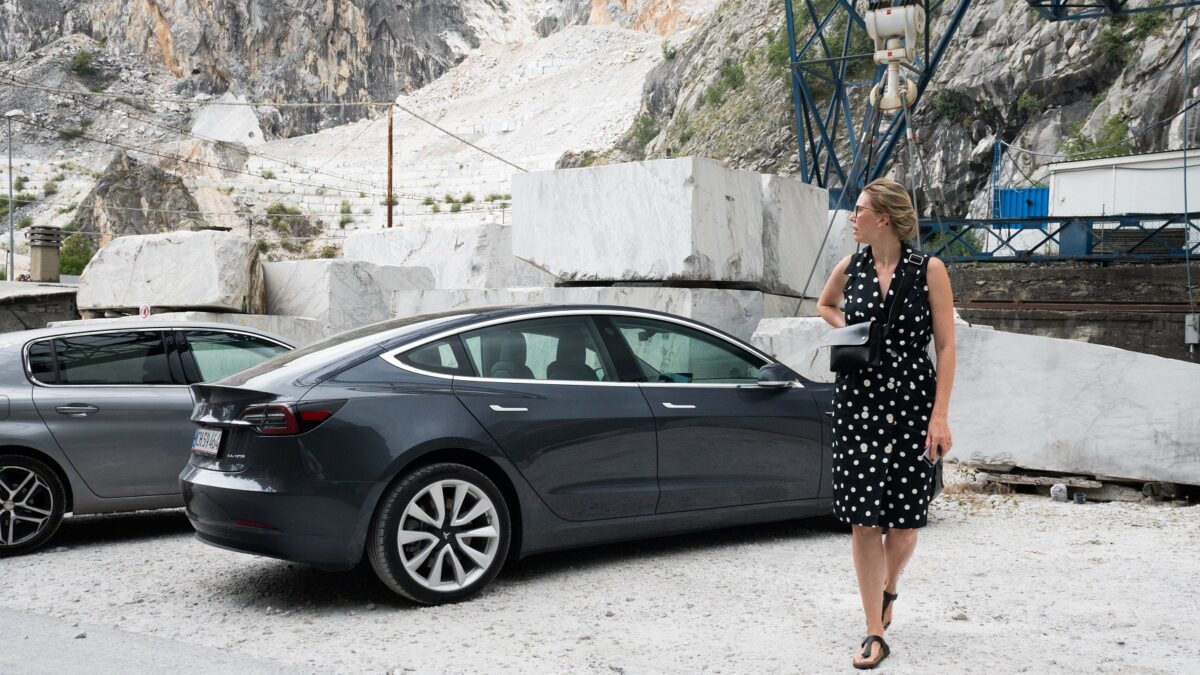 This post is part of a series of blog posts covering our Tesla Model 3 road trip. If you didn’t already, read it from the beginning

After a couple of days in the Tesla Model 3 with much driving from Denmark across Germany and Switzerland, we finally arrived in Ripa in Tuscany which would be our home for 3 days. Staying at this great place to have a good base for exploring the area. The day started with supercharging at the nearby charger. Many times these superchargers are placed next to hotels and gas stations so you have a chance to use a restroom and buy something to eat and drink while you wait. As of this writing it has been announced that Tesla will soon allow Youtube and Netflix streaming in the in-car browser while the car is not moving. Should be coming with the next over-the-air-update. By then the charging time will be no issue – not that we mind waiting as it is.

Enjoying the hills and small towns with the Tesla Model 3

At the top of our list for the Ripa area was to see the marble quarries in Carrara, the home area for extracting some of the most famous marble from the mountains. Driving up the mountains to the quarries was a lot of fun, though I got a little nervous when roads turned to gravel. We later found out that we accidentally took the roads meant for the trucks that move the huge marble blocks down the mountain. Had to insist on a thorough car wash when we came back down!

Went back down the mountain on “safer” or at least less dirty roads but I still had to insist on a carwash. I think I may have been impossible to be around for the couple of hours it took to find a manual car wash and get a free time slot. Before we went down we also visited the town of Carrara where we expected to see a town that profited from the popularity and economy of the marble quarries. We where disappointed and hadn’t done our history and research. Turns out that the town of Carrara does not profit from the quarries in any way. Centuries ago local agreements where made so the marble quarries where acquired by private companies and relieved of taxes, leaving the town of Carrara to be one of the poorest places in Tuscany.

In the night we decided to drive up to a restaurant in the hills to get an Aperol Spritz, and we had drive some pretty steep curves to get there. The Model 3 is a low set car – the lowest I have tried to drive – so we ended up giving the Model 3 a little belly rub with the road on one of the curves. Oops.

The good life – letting the Model 3 have a little break

We didn’t want to drive all the time, since we had booked this nice place with an awesome pool. There had to be time for pizza, pool and beer. So that’s what we did for most of the next day before we went out and had the most fantastic dinner.

Before we bought the Tesla Model 3 we had a Volvo S60 which was a great car. It also had a decent app where you could set it to heat up in the winter time using a heater that is not depending on a running engine. Very nice to get into a heated car when it’s cold. But if you wanted the opposite, to cool the car, you had to remotely start the engine which you could with the Volvo (though illegal, so you would never do it) for the air conditioning to work. Somehow it was coupled with the engine to get power. In the Tesla Model 3 the air conditioning is does not need a running engine. There is no such thing a a “turned on engine” in a Tesla. You are either parked or you drive. There is no “starting the car”. You just press the accelerator. This means that from the app you just set the desired temperature moments – a few minutes – before you want to go – and the car is pleasantly cooled of.

Great days in the Ripa area where we visited several small towns, ate, drank and relaxed. Next followed our trip to the eastern part of Tuscany from day 8 and forward. Read about day 8 – arriving in Chianti.

No votes so far! Be the first to rate this post.